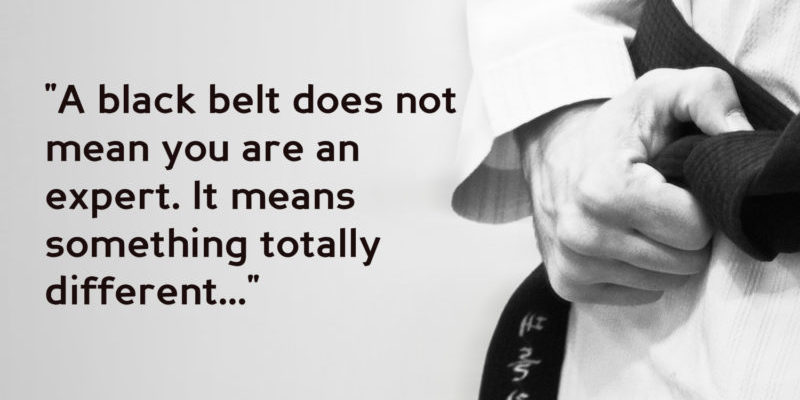 Black Belt: What It Means (and What It Doesn’t)

When someone finds out you study karate, one of the first questions they usually ask is “are you a Black Belt?” After all, the Black Belt is one of the best known parts of the martial arts, and people have all sorts of expectations about what it means.

“Can you beat someone up?”

“Can you ‘karate chop’ a brick in half?”

In addition to the awkwardness of conversations like these, they also show how little is understood about karate and its practitioners — and, sadly, that lack of understanding isn’t always limited to outsiders.

How many of us have heard a fellow student ask (or maybe we’ve been guilty of this ourselves), when they can “get their next belt (or stripe)”? How many times do students get frustrated if they’ve spent ‘too long’ at one belt rank, or place too much importance on that newly achieved rank? How many times have you heard a Sensei remind students that their rank isn’t as important as the quality of their skill, only for that advice to be ignored?

There are a few realities we need to understand and embrace about “rank” in karate.

First, we need to understand that the colored belt system is a modern development in karate, borrowed from Judo to make progress more explicit. Historically, there were no belts in karate. Students simply trained, and learned, and improved their skill. “Mastery” was determined by your ability, not the color of your belt.

Secondly, we should understand that rank has as much of little significance as we put into it. On the one hand, earning a new belt is an achievement worth being proud of. It signifies the amount of time, hard work, and practice that you’ve invested into your training. It’s also an acknowledgement of that hard work and growth from your Sensei. On the other hand, it’s just a belt. Bruce Lee famously said, on the subject of belt ranks, that belts are good for keeping your gi pants up and your jacket closed, and not much else. And anyone who has spent any time in a karate dojo will notice that — although the overall skill level of the students goes up with each rank — there are always a handful of lower rank students who are more skilled or working harder in class than some higher rank students. In other words, belt rank can be a good indicator of a student’s skill – but it doesn’t guarantee it.

Compare earning a Black Belt to getting a Driver’s License. Just to receive it, you’ve had to learn all the basic skills and concepts, drill those basics to develop your ability to use them, and pass a comprehensive test to prove to a qualified instructor that you know those basics well. Most would agree that a sixteen or seventeen year old who has their driver’s license knows how to drive a car, but no one would describe them as an expert driver yet. It takes years and years more practice before “expertise” is earned. A new Black Belt is the same way: highly proficient in the basic techniques and principles of karate, but by no means an expert. Their karate journey is only just beginning.

Getting to Black Belt isn’t the end of a student’s training, and students who quit their training after earning a Black Belt probably shouldn’t have received that rank in the first place. It’s a major milestone, but only a milestone, on a much larger and longer journey. Done well, karate is designed to be a lifelong practice where (regardless of rank, reward, or external acknowledgement) students push themselves to develop their mental, physical, and emotional/spiritual strength — one step further every day. The training becomes the incentive to continue training.

Many students don’t progress far enough into their training to develop this deeper understanding and appreciation for the martial arts — but those who do discover that the real rewards of karate training are far greater than whatever superficial feelings of success they experience when receiving a new belt.

There are, of course, many benefits to the belt system. They’re an excellent way to organize curriculum and track student progress, and they’re a wonderful way to incentivize children and beginners until they reach a level of maturity in their training where the belts become less important. They also serve as a great exercise in goal setting for students of all ages — where a green belt or a brown belt    can be seen not as a superficial reward, but as a concrete benchmark for the level of skill students should strive to reach. And a Black Belt remains an outstanding achievement that carries tremendous emotional significance for practitioners — not the act of summiting the proverbial mountain, but simply arriving at a new vista from which to survey the path still ahead.

6 Warning Signs When Searching For A Karate School
August 7, 2019

10 Reasons To Enroll Your Child In Karate Classes
August 7, 2019
Recent Articles
FROM OUR GALLERY